President Trump is a Commander in Chief like no other, and that is true for a multitude of unique reasons.

Not only has he come from outside of Washington DC with the sole purpose to shake up what criminality and corruption lives within, but he has down so while under unprecedented attack both by the media and by the legislative branch.

Furthermore, Trump has found himself at the center of a focused and aggravating campaign to normalize depictions of violence against him, starting with Kathy Griffin’s gruesome beheading stunt, and culminating this week as his visage is hogtied several stories above New York City’s Times Square.

An athletic clothing brand has launched a controversial campaign that seems to take aim at President Trump; indeed, a billboard ad in Times Square has him hogtied in front of the White House.

On Wednesday, the brand, Dhvani, unveiled the first in a series of images meant to protest the Trump administration’s “gag rule” prohibiting doctors at Title X-funded clinics from referring patients for abortions — a rule that prompted Planned Parenthood to pull out of the federal grant program in August.

The billboard ad, called “Lady Liberty,” showed model Michal Mesa, whom Dhvani described in a press release as a Marine Corps veteran and a middle school teacher, standing over a screaming President Trump with her foot on his head. He is tied up, and a storm floats over the White House. 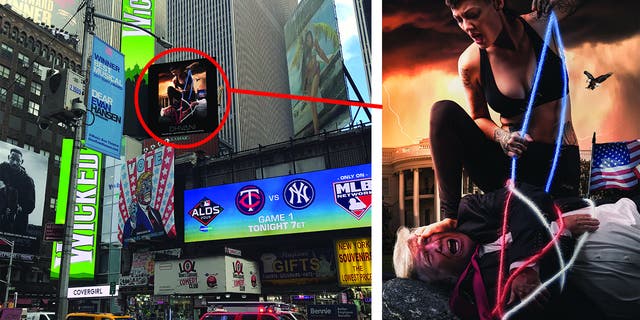 This normalization of violence against the President is both disheartening and dangerous, especially for a man who has already been the victim of at least one assassination attempt back in 2016.

Paul Duke - September 17, 2021
0
This could be real trouble for the precocious progressive.
© Copyright 2019 SteadfastDaily.com